Showing posts from April, 2006
Show all

The Resurrection of Environmentalism? 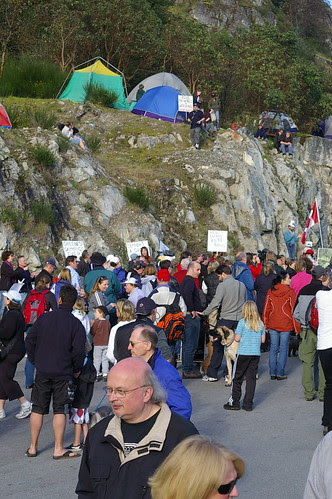 In the year and a half since Shellenberger and Nordhaus released their famous (or infamous depending upon your viewpoint) essay on the “Death of Environmentalism” it has almost seemed like environmentalism has in fact died. There have not been large scale protests like the ones that lead up to and followed the WTO meetings in Seattle (at least not here in North America). And although there have been blockades in the forests they are much smaller than the “war in the woods” that occurred during the 80s and 90s.

Environmentalists (and other activists) that I have talked to lately have been bemoaning both their own apathy and the apathy of others. The local weekly newspaper here even had an article in their most recent edition called “Apathy is the new activism”

But perhaps the “Resurrection of Environmentalism” occurred Easter Monday in a most unusual location – West Vancouver, Canada's richest municipality.

Highway one and triple convergence

- April 11, 2006
I recently had a conversation with a friend (Nancy Callan, author and environmental food activist) about the expansion of highway one. I mentioned that freeway expansion rarely solves the congestion and often during peak hours congestion returns to previous levels in a matter of months. This occurs because of triple convergence (also here). At the time I had forgotten what the three convergences were but after a little research here they are:many drivers who formerly used alternative routes during peak hours switch to the improved expressway (spatial convergence);many drivers who formerly traveled just before or after the peak hours start traveling during those hours (time convergence); some commuters who used to take public transportation during peak hours now switch to driving, since it has become faster (modal convergence)
Post a Comment
Read more
More posts